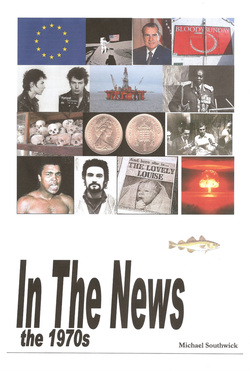 Introduction - an overview of the decade that time forgot

Chapter 1: The Moon Landings (1969-72)
Why were there two giant Saturn V Rocket Airfix models on the author's family sideboard throughout the early years of the decade? Ah, yes, it was age of the Apollo space missions. Twelve men have walked on the Moon, and eight of them did so in the seventies. Find out what all the fuss was about, and what it meant to an adventure-seeking pre-pubescent.

Chapter 2: World Cup Woes (1970)
The 1970 Football World Cup may have been the best of all-time, but what were the reigning champions, England, up to both before and during this extraordinary summer extravaganza? Why were the South American authorities so keen on lynching honest Bobby Moore, our beloved captain? Oh, and then there was the football itself ... and yet more conspiracy theories.

Chapter 3: Decimalisation (1971)
The old folk got their knickers in a right old twist over this one. I mean, why should we ditch our archaic, unwieldy system of currency for a slick and easy-to-understand one, anyway? Was it something to do with those pesky Europeans, or were we just being awkward for no good reason?

Chapter 4: Idi Amin (1971-79)
The mighty Idi Amin, Ugandan president - nay, dictator - for most of the decade, was often portrayed as a figure of fun in the media. But there was nothing funny about what was going on in the old British colony, where countless thousands of innocents were losing their lives in often bizarre circumstances and by ingenious means. Read how the self-appointed 'King of Scotland' pulled it off, and made something of a fool of his former masters.

Chapter 5: Bloody Sunday (1972)
The defining moment of 'The Troubles' that left a legacy which still lives with us today. How did fourteen unarmed men manage to lose their lives on that fateful day in Londonderry in 1972? And what were the repercussions of the botched inquiry that followed? Have we finally put the whole sorry episode behind us?

Chapter 6: Into the EEC (1973)
Europhile Ted Heath, PM during 1970-74, somehow managed to persuade both the British public and our continental cousins to allow him to lead the UK into membership of the European 'Common Market'. How ever did he manage to pull off this extraordinary piece of subterfuge? Was it the right thing to do? And what effect did it have of the British psyche, both then and now?

Chapter 7: Watergate (1974)
One of the most newsworthy overseas news stories of the decade, the Watergate Scandal brought US president, Richard Nixon, to his knees - but only reluctantly, and after a strenuous rearguard action by the world's most powerful man. Read about the case that shook the political world, and changed journalistic reporting for good.

Chapter 8: The Cod Wars (1972-76)
Why were British fishing trawlers and their naval chaperones being hassled, bullied and generally taken to task over the right to fish in a particular spot of the North Atlantic during the mid-1970s? It might have seemed like a storm in a tea-cup to most onlookers, but to us Brits there was more at stake. The whole ludicrous episode was symbolic of the country's growing predicament as we slid worryingly from our position as a world power.

Chapter 9: Lord Lucan (1974)
The most famous murder mystery of the decade, and among the biggest of all-time. Did a peer of the realm really do a permanent runner after murdering his children's nanny and attempting to do the same to his wife? And whether he did or didn't, whatever became of him afterwards? Could he still be alive somewhere today?

Chapter 10: Muhammad Ali (1974-75)
The career of the self-proclaimed greatest sportsman of all-time peaked during 1974-75 with two epic fights against his most talented adversaries, Joe Frazier and George Foreman. This is the story of 'The Rumble in the Jungle' and 'The Thrilla in Manila' - encounters that will live forever in the memories of boxing fans the world over.

Chapter 11: North Sea Oil & Gas (1975)
What momentous occasion caused the author and his classmates to skip a couple of lessons and be ushered into the school TV Room to witness, live, one of the, er, defining moments of the decade? The Queen pushing a big, gold-plated knob, of course - which signalled the start of the flow of North Sea Oil into British hands. Did the discovery live up to expectations?

Chapter 12: Cambodia's Killing Fields (1975-79)
Whilst we were all fretting about power cuts and our 'Winter of Discontent', your average Cambodian was battling the odds in the day-to-day struggle to stay alive. Pol Pot and his merry murderers were on the rampage during 1975-79, killing as many of their citizens as they could in the name of one of those daft communist revolutions. This was the most brutal of them all, however. Astonishing stuff.

Chapter 13: The Yorkshire Ripper (1975-81)
The extraordinary account of the activities of, and the hunt for, the infamous Yorkshire Ripper - a story which dominated the media during the second half of the decade. What were the motives of Peter Sutcliffe, the man convicted of thirteen counts of murder and seven counts of attempted murder? And, perhaps equally as  important, what was the sequence of events of the much-criticised search for the killer?

Chapter 14: Rinkagate - The Jeremy Thorpe Scandal (1975-79)
A story which has been almost completely forgotten, but which at the time captured the public imagination. It had the essential ingredient of the perfect scandal: homosexual sex, attempted murder and a prominent politician. You couldn't have made it up - though much of it may well have been, as it happens.

Chapter 15 - World's First Test Tube Baby (1978)
With Britain's reputation as a major world power foundering, it was left to the scientific establishment to lead the way. The astonishing achievement that was the conception and birth of the world's first test tube baby was perhaps the UK's greatest moment of the 1970s - and it had been decades in the making. But the story is an eminently modest one, pulled off with typical British restraint in a blaze of non-glory - though it ruffled a few feathers along the way.

Chapter 16 - The 'Trial' & Death of Sid Vicious (1978-79)
Sid Vicious, the cover boy of British punk, died in February 1979 in suspicious circumstances before he could be brought to trial for the suspected murder of his girlfriend, Nancy Spungen, in a New York Hotel. The sequence of events during the night of the 'murder' are cloaked in mystery, confusion and speculation. Take a look at the facts, a few rumours ... and make up your own mind. Or not.

Chapter 17: Anthony Blunt & the Cambridge Spy Ring (1979)
When this story broke in 1979, it unearthed one heck of a can of worms. How was it that several members of our trusted upper class could pose such a threat to our national security, and for so long? And why the cover-up? When Anthony Blunt was exposed in 1979 - some 15 years after the whole affair had been tied up - it created a storm of paranoiac panic. And was there ever anything in it for the traitorous spies themselves?

Chapter 18: The Cold War (1970-79)
The backdrop to the decade was the ever-present threat of nuclear Armageddon. But, strangely, it went quiet for long stretches. Anyway, it never happened - though there were times when it might have. And in the very last week of the decade things started getting scary, big-time ...

Appendix: News Chronology, 1970-79 (see also here for a transcript from the book)

Select Bibliography, Websites and Other Media - where I nicked all the info from.